Paying it forward with Plato’s Closet 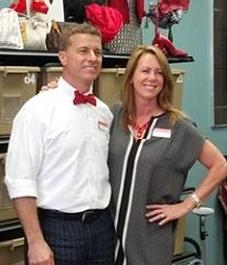 Husband and wife team Tony and Julie Finical are the owners of several Plato’s Closet stores throughout Louisiana. Plato’s Closet is a clothing franchise which buys and sells lightly used, fashionable clothing and accessories appealing to the teen and young adult demographic. With over 460 stores and more opening each month, Plato’s closet is the fastest-growing retail franchise in North America.
Tony and Julie opened their first Plato’s Closet store in 2003 after owning a sign and graphics franchise for several years. It was through a field rep for the sign franchise that they were first made aware of Plato’s Closet. Julie says they immediately wanted to learn more about the franchise.
“Two weeks before our daughter was 15, I’d taken out bags of her clothes. I was mad that there was no place for them to go. And when [the field rep] spoke about it, I think within 6 months we went directly to discovery days and opened that store in Baton Rouge.”

Although Julie was initially more involved with the store than her husband, it didn’t take long for Tony to realise its potential. The couple loved the brand so much that they eventually opened several new Plato’s Closet locations before going on to open Style Encore and Once Upon a Child stores, other brands under the Winmark Corporation umbrella.
Tony says, “It’s kind of funny – from Once Upon a Child to Plato’s Closet to Style Encore, I like to tell people that we have a customer now from cradle to grave.”
In addition to the variety that owning stores for various age ranges provides, Tony and Julie also value the framework and support that the franchisor provides.
Tony says, “I’ve never had a second thought about Winmark. That’s why we are part of a franchise. The beautiful thing is that these people, they talk to over 1000 franchisees, and then all that knowledge that they’re able to accumulate and be able to disperse to me, that’s invaluable.”
Tony adds that working with Plato’s Closet and Winmark has provided him with the kind of success that he has long sought.
“Everyone has different reasons why they get in business for themselves. My reasons never were to make as much money as possible - my reasons were that I wanted to be able to have freedom. Because at the end of the day, what’s the definition of success? Is it having money in your bank account or is it having a family that really loves you?”

The couple have found their experience with Plato’s Closet so rewarding that they want to enable other people to enjoy the success with the brand that they have had. As part of their plans to continue growing their business, they have brought on a partner to share their franchising journey with.
“In our first franchise that’s the way we got started. At 23, we were the working partner, and we’re able to day to give that opportunity to someone else,” Julie explains.
Tony adds: “Really, that’s success, right there. You’re paying it forward. Other people are getting blessed.”