The Melting Pot scouts from within for new owners

To prevent the landslides of time from bringing Tampa, Florida-based The Melting Pot down the proverbial mountain, its corporate leadership developed an innovative “Path to Grow” program that encourages its most promising restaurant employees to become future franchisees, complete with career mentorship, operations training and financial assistance. “We were recognizing the fact that The Melting Pot has been around for 40 years,” said Chief Business and People Development Officer Dan Stone. “We have some franchise owners that have been in the system for decades, and some of them are reaching different points in their life stage.” Taking a different approach than other established restaurant brands that all share in the struggle of attracting new franchisees, The Melting Pot’s new program is expressly designed for the purchase of an existing location, not new construction.

Aside from broadening the pool of potential franchisees, Stone added the program gives the company flexibility in situations where something like a one-time year-over-year sales decline could shut the door to bank financing, limiting the options for existing franchisees looking to exit the business. “What if we could cast a wider net of potential buyers without having to go through the traditional channels of lending?” Stone asked. The aim, he said, is creating a doable pathway to buy a restaurant location for outstanding employees who “have the know-how and experience we’re seeking, but just simply don’t have the financial means to purchase an investment the size of a typical Melting Pot that’s for sale.” 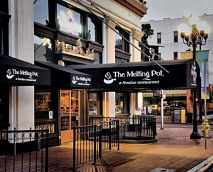 The program is particularly beneficial for The Melting Pot, which has a large number of single-unit owners who have been in the system for many years. “About two-thirds of our owners own one location, so it’s not a situation like some brands where you’ll have one owner that owns 80 Subways,” Stone said, as an example.

“A lot of our franchise owners stick with the brand for a long time … and as the system was aging they were wanting to understand what kind of support they could get from us as it relates to exit strategy.”

While Path to Grow is primarily aimed at existing employees, being an employee is not a requirement, so any potential buyer who demonstrates the leadership and other coveted qualities may qualify for financial assistance from the corporation allowing them to put down as little as five percent of the total purchase price. Stone characterized the loan terms as “very competitive” with interest rates in the low 4 percent range.

“It streamlines the financing process and gives some of our managers that have been in the system a long time a path for upward growth, to ownership if that’s something they want,” he said. “We have lost some great people that have been managing some of our restaurants … so this provides a path for someone that has that dream of owning their own Melting Pot.”

In Spokane, Washington, Kim and Hollis Silva are the newest franchisees in The Melting Pot’s system, and were the first participants in its Path to Grow program. The married couple officially took over ownership of the location last October, and said it “was a long time coming” as both worked under the previous owner and harbored goals of eventually owning the restaurant.

First approached by one of the company’s regional department heads, the Silvas found out the previous owner was looking toward the exits. The corporation mentioned the program more than a year before the change in ownership.

“When we had this opportunity, I went home that night and talked to Hollis about it and said I really think this would be great,” Kim recalled. “I think we could do great things at the restaurant and I want to try to pursue it.”

Before pulling the trigger, Hollis left his management job at Red Robin and came to work at The Melting Pot location to learn the ropes as they prepared to take over the keys. Working opposite schedules during this period was a challenge for both as they developed a rhythm and structure for working as a team. Prior to signing the paperwork, Kim said their concerns were minimal, including the long hours that weren’t much of a change for them, as they were both managing high-volume restaurants.

Finances were at the top of their list of worries, especially as the previous owner “gave the impression that the restaurant wasn’t as successful as he hoped,” which highlighted the importance of diving into its P&L and building a plan to increase sales. Path to Grow allowed them to put down only 10 percent of the total purchase price, with the corporation financing the balance on a three-year term.

Less than a year into ownership, Kim said marketing has been their biggest change and challenge. With a background in marketing consulting, she knew it was important to reintroduce the brand throughout Spokane’s media market to increase its visibility and reach a new crowd of diners. Sales have increased and the store has been profitable in every month of their ownership. Playing off his strengths and experience, Hollis spends his time managing the restaurant’s operations.

Looking back at Path to Grow from start to finish, Kim said going down to the company’s headquarters for three days was very helpful, as they went through expectations of ownership, regular responsibilities and the details of the financing package.

“It’s really different now,” Kim said of their changed roles as owners. “It’s really humbling to see how much and how hard everybody has worked for us … and everybody has been super helpful and supportive of us, so I couldn’t be happier.”