Upon opening in February of 2010, the Avenues store was an instant success in a much smaller footprint and has continued to be a top performer in the Region and Nation. In February of 2015 the store was relocated to a space that was over 50% larger, has excellent visibility from the street, the opportunity to get more inventory to the sales floor which allowed for continued sales growth.

This is one of three stores in the Jacksonville, FL market and is part of an exit/retirement strategy for the seller. This is potentially a multi-unit transaction for a properly capitalized and operationally capable candidate.

The store is located in the end cap anchor of the Avenues South Shopping Center. The store is 5,500 total sq ft with approximately 4800 sq ft selling. There are 3 registers and checkout stations (pre-wired for a 4th), 6 fitting rooms and a large office/break room. The center offers plenty of well-lit parking and has gone through renovations within the past 12 months. This location is highly visible from Philips Highway/US 1 and conveniently situated one block north of the I-295 exit. In addition University of North Florida campus with an enrollment of nearly 16,000 students is close providing an excellent target market.

Current owner is selling as they wish to retire.

Plato’s Closet, a Winmark brand, is the established retail franchise leader in the teen resale space. Plato’s Closet offers gently-used, brand-name apparel and accessories to both girls and guys at a fraction of the retail cost.

There are more than 460 Plato’s Closet locations and more opening every month making Plato’s Closet the fastest growing retail franchise in North America. 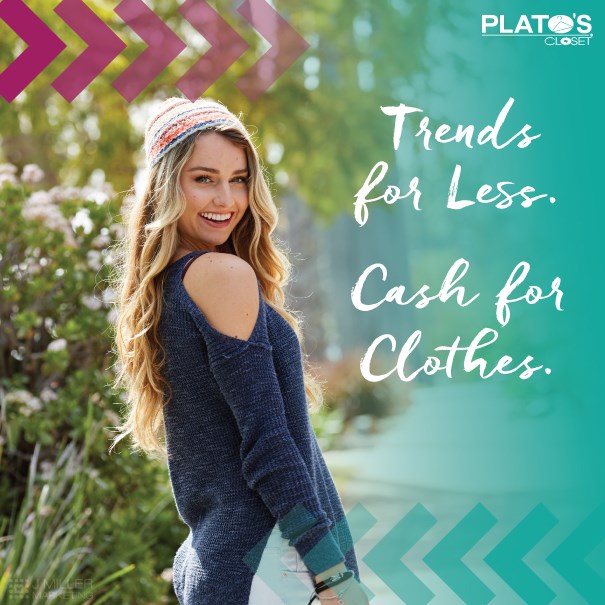 At Plato’s closet, we buy our inventory from our customers every day and unlike consignment, we pay cash on the spot. Our customers buy outfits at a fraction of the cost of full retail prices AND get cash on the spot for items they no longer use? It’s a win-win for both the customer and the franchisee. This buy/sell model makes Plato’s Closet a truly unique retail franchise opportunity.

In fact, Plato’s Closet is ranked #1 in its category in Entrepreneur Magazine’s Franchise 500 and has been in the Top 500 for the last 11 years. Plato’s Closet is also ranked in both the Fastest Growing and America’s Top Global franchise categories. In 2014, Plato’s Closet received another outstanding accolade as it was ranked the #1 franchise investment opportunity by Forbes Magazine in the $150,000 to $500,000 investment category!

To find out more about this Plato's Closet franchise for Sale please fill in the form below and submit.